Disclaimer: I wrote the bulk of this post on 6/5/10, which is like 2 years ago in baby time. I am just now getting back to it to it. So it goes.

I have about a dozen things to write about, all of which could be posts unto themselves but they won't for lack of time so you get bullets. 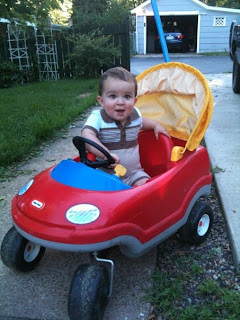 I don't know why I've been such a crappy blogger lately. I think I'm mostly just tired. I'm still not 100% well and I'm in the middle of an extra-curricular project that consumes my weeknights and will continue to do so until mid-August. I miss blogging, though. I miss knowing that no matter how hectic things are, I'm creating an archive I can look back on to remember this blur my life has become. Just some thoughts - neither here nor there, I guess.
Posted by K at 3:49 PM 4 comments: