the state of things

I feel like this blog has become awfully complain-y (when it isn’t being neglected to within an inch of its life, that is) for being written by the mother of the world’s most adorable baby*. So please indulge me in the following 60-second rant and then I will suck it up and act appropriately grateful for my seat on the mommy train.
Oh my god I hate breastfeeding. It isn’t the act of breastfeeding I hate these days - it’s rarely painful anymore, thankfully. It’s the assault that my feeble performance unleashes upon any last threads of faith I had in my body. I can’t say there were many that made it through the infertility/c-section gauntlet, but I guess there were a few survivors because the sting is coming from somewhere. To my credit, I’ve persevered despite all challenges. I currently spend an average of 1.5 hours of my workday pumping and I net roughly six ounces, which my linebacker of a son devours in a single feeding at daycare the next day. I’m at a loss to describe how soul-depleting this exercise has become. I feel like a jerk for even going through the motions of combining my two little bottles after a pumping session. Sometimes there’s only an ounce and a half between the two. Seriously. An ounce and a half. Why am I bothering? I’ll tell you why. I’m bothering because I drank the “breastmilk is liquid gold” kool-aid and I’m determined to provide as much of it as I can, even if it is next to nothing. That said, I gotta admit that I’m really feeling the futility of it these days. I’m not nursing enough to get any benefit from it myself (my post-baby pooch continues to hang out in all of its glory and AF is making regular visits again, every 31 days to the hour, thank you very much) so I can’t imagine the pitiful amount of milk he’s getting is making much of a difference on his end. I think the biggest issue is that, against all reason, I am clinging to breastfeeding because it’s my body’s last chance to come through on something I want it to do; my last ticket into the “good mom” club (my own invention, read: not based in reality). I used to think it was the only thing that was ultimately in my control – I couldn’t make myself get pregnant, I couldn’t make myself have a natural birth, but damn it, I’ll torture all three of us for as long as I have to in order to breastfeed because NO ONE can take that away from me. I sound crazy, don’t I? It isn’t even true, not anymore. My supply is dwindling before my eyes and no amount of feeding, pumping, nutritional supplement-ing or shaking my fists at the heavens is halting the decline. I’ve promised myself I’ll continue until he is six months old (I’ve gotten myself this far by committing to a month at a time) so I guess I’ll reevaluate in a couple of weeks. P.S. Elliot can’t tolerate any dairy in my diet so it’s been a long, hot summer without ice cream. Or pizza. Boo.

I think that was more than 60 seconds. Oh well. I’m not going to beat myself up for that on top of everything else.
So, on to happier topics:
Elliot is sitting up on his own very well these days. We stay nearby because if he reaches for something with any gusto, it’s likely his whole body is going to go along, but our rescues are becoming fewer and farther between.
I brought home a second-hand jumparoo and Elliot thinks it’s the most fantastic thing ever. He’s content to hang out in it for long enough for us to fold a load of laundry or have a quick dinner together, so we think it’s pretty darn fantastic, too.
We planned to wait until he was 6-months old for his next professional photos but I caved and took him last week. It’s hopelessly cliché for me to gush about how cute he is, right? I mean, even if I admit my bias? Eh, I’ll just show you some of the pics and you can be your own judge: 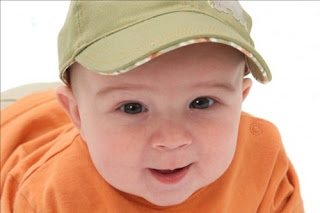 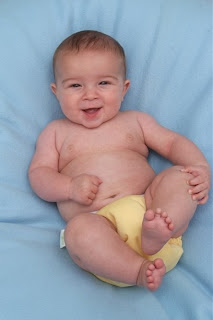 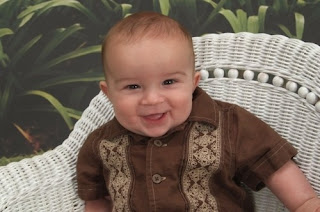 He’s got spoon-feeding down and he’s loving rice cereal and oatmeal. I guess we should add something a little more exciting soon. He’s also teething, which isn’t so fun, but I agreed not to talk about anything else negative in this post so we’ll table that discussion for now.
He’s so ready to start moving himself around but he can’t figure out the logistics just yet. He can get his butt in the air (adorable), or he can push up on his arms, but not both together. If we hold his hands and help him to walk around the house, he squeals with delight.
He’s been “talking” for a few months now but within the last week or so, he’s found his volume dial and now wants to talk REALLY, REALLY LOUDLY all of the time. I think it’s pretty cute, but I’m hoping it doesn’t last long because he and I have a long flight to take in less than three weeks and I’d prefer the other passengers not wish us dead.
He’s growing out of clothes as quickly as I can buy them so I’ve started haunting garage sales on a weekly basis. I’m finding I actually enjoy the treasure hunt nature of it and it’s nice to have stumbled into a cheap and useful hobby.
I really think he may smile more than any baby I’ve known. He lights up when anyone talks to him and making him laugh is the highlight of my day.
All in all, things are pretty good. I could use a little more sleep, but who couldn’t, really? I can’t believe we’re almost halfway through his first year already. The mind boggles…

*Internet nieces and nephews excluded, of course.
Posted by K at 3:54 PM 8 comments:

dating in the era of (parental) responsibility

M and I saw Julie & Julia this weekend.

That is, she saw it at 1:15pm and I saw it at 4:15pm at the same theater. We talked about it over dinner. At 9:30pm. Because that is when we finally get around to eating these days.

We really need to cultivate some babysitting resources.
Posted by K at 3:28 PM 7 comments:

All in the Family

Man, I've been a lousy blogger lately. We've been busy and traveling and busy and... yeah, you all know how it goes.
Here's the latest from around these parts:
So about that post title... Elliot's daycare has a family tree on the wall of the infant room. It's a big construction paper tree and they asked all families to bring in pictures to cut up and put along the branches. Each branch has three individual pictures on it - baby, mommy and daddy - all cut into matching 2 inch diameter circles. It took me a while to bring in pictures of us because all of the pictures I like of M and I have us standing so close together, they wouldn't have been able to cut us apart easily. I finally dug out a few older shots, one of which was a picture of M from our wedding with one of our guests who just happened to be her ex-boyfriend from high school. I brought the three intact pictures in the other day but I forgot to check out at the finished product until this afternoon. There we were, up on the tree, four little circles: Elliot, K, M... and the ex. I pulled him down and re-arranged our pictures so you couldn't tell he was ever there. When I explained to Elliot's teacher that he wasn't exactly part of our family, she more or less said that they didn't want to make any assumptions. How great is that? M and I both got a good chuckle out of the whole thing. We can't wait to tell the ex where his picture ended up. :-)
Posted by K at 8:50 PM 3 comments: